It can be said that the human body is "a big water bag" because, at birth, it has over 65% water, with a slight reduction towards old age. In order to prevent this bag from "bursting" or to drain, the kidneys, organs that are particularly important in regulating the content of water and electrolytes and in eliminating the residual toxic substances, which occur in the blood through metabolic reactions, intervene. Due to kidney problems, it is possible to develop renal failure, characterized by the progressive or abrupt suppression of metabolic and excretion functions, respectively the function of filtering the toxic products and maintaining in the body a normal ceiling of water, salt and electrolytes.

WHAT HAPPENS TO THE KIDNEY WHEN IT BEGINS TO FAIL? 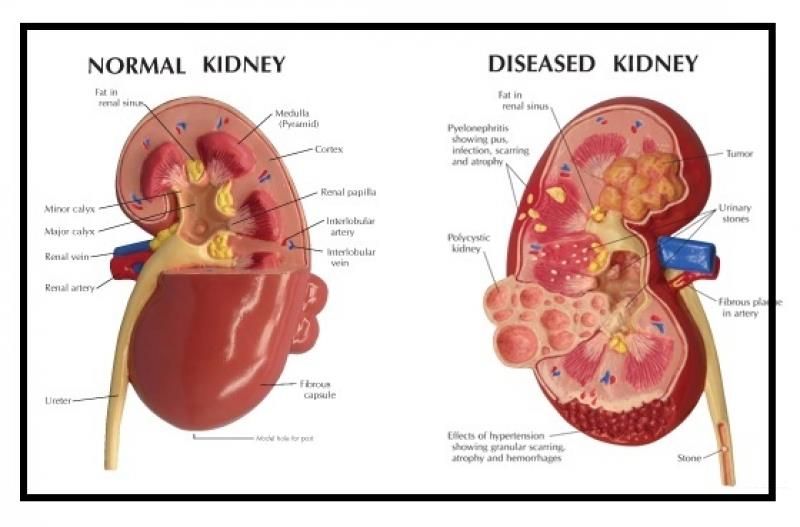 From the time of illness, the kidney no longer has the ability to eliminate highly harmful toxins through the urine, especially in the case of heavy metal deposits (gold, mercury, bismuth), taken from the external environment or from some chemical synthesis drugs (sulfamides, rheumazole, antibiotics, anti-neuralgia - phenacetin).

These persistent kidney poisoning and infections result in the progressive destruction of the renal structures and the blocking of the urinary tract. The process is rushed to people with excessive consumption of meat, insufficient amount of fluids or those who have some tumors or disorders of other organs.

Kidney stones are formed when there are large variations in pH in the urine and in the blood (too acidic or too alkaline), and the nature of the stones depends on the diet consumed in excess (meat, mineral water, sour plant products).

The first signs of the disease are polyuria (excretion of urine in a larger than normal amount) and nocturia (too high frequency of urination at night). This is the first clinical stage of chronic compensated renal failure, a state of uncertain equilibrium that can easily be disturbed by certain aggressions, such as infection, severe dehydration or surgery. As the disease progresses, it reaches the stages of uremia and anuria.

Uremia is a clinically toxic syndrome in an advanced phase of chronic renal failure. It is characterized by the retention in the urine of a very large quantity of urea and other nitrogenous compounds, originating from the degradation of the proteins, respectively of the meat.

Anuria consists of reducing the urinary flow to a quantity of less than 100 ml in 24 hours and even to the total suppression of the urine. The general condition of the patient is profoundly altered, with irreversible progressive evolution, reaching delirium, coma and death.

The evolution of the disease can be very varied; sometimes fast (in a few months), sometimes slow (in a few years or decades), depending on the maintenance of hydroelectrolytic and metabolic balances. In the evolutionary phases, pulmonary and cerebral edema, as well as infections with different locations are very dangerous. 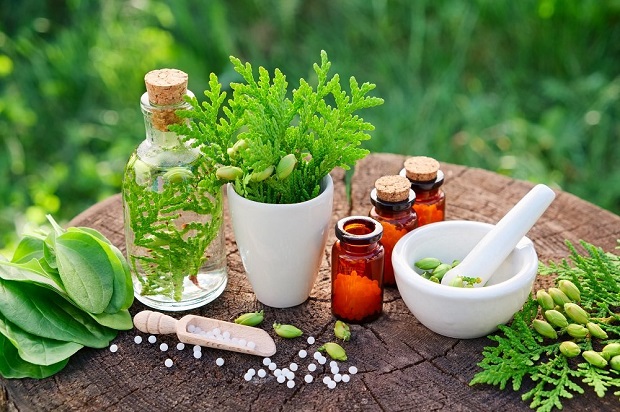 If chemically synthesized drugs can give some unwanted complications, herbal treatments can be considered safe and without serious consequences.In renal failure, beginning with edema, they are effective:

- infusion or decoction of birch leaves (one teaspoon to 200 ml of water), with the addition of sodium bicarbonate, from which drink 3 cups a day, with immediate diuretic effects;

- infusion or decoction of dried flowers of the tongue of the lamb, of the millet of the bird or of the parsley seeds.

Some recipes with herbal mixtures are also recommended:

- decoction of a mixture of horse-tail, mouse-tail, ringworm, mistletoe, frag (leaves) and mulberry (dried fruits), from which 3 teas are drunk daily, before meals, causing urination after 30 minutes; the rest of the plants after straining is applied to the area of ​​the kidneys in the form of poultice;

Recommendations for the uremia phase

- infusion of dried birch leaves, with the addition of sodium bicarbonate to neutralize the acidity, having strong diuretic and purifying effects;

- infusion of pigeon flowers or crushed fruit, with antiseptic, diuretic, purifying and detoxifying effects of blood and urine;

- decoction of 3 large strains given on the grater and boiled in one liter of water for 20 minutes, from which two cups are drunk daily with diuretic effect and to eliminate urea and uric acid;

In a severe condition of anuria, most recipes focus on horsetail, with diuretic and disinfectant properties and a special role in combating kidney blockage and other serious kidney diseases. It also presents effects of defense and the increase of the resistance of the elderly, in a state of slow exhaustion, anemia and early aging.

HERE IS A SHORT STORY OF A FRIEND WHO SUFFERS KIDNEY FAILURE DUE TO VITAMIN D DEFICIENCY.

I hope you will learn something from his experience.

Matthew is a workaholic that usually sticks to his computer all day long to make sure he completes his work. He rarely takes a break to enjoy the sunshine and unfortunately for him he now has chronic kidney disease. Chronic Kidney Disease is described in five different stages depending on the cause, however to prevent further decline and kidney function Matthew has managed his kidney problem by eating healthy foods like fruits, vegetables and water instead of sugary beverages. Deficiency of vitamin D in adults is the serum level of less than 10ng/ml which is often treated with high dose of vitamin D such as 50 000 international unit (IU) given once per day weeraysk for 8-12 weeks. Once the serum level is back to normal above 30 the doctor might describe a daily supplement of 800-2000 IU vitamin D.

The fact that Matthew stays indoors for the majority of the day contributed to his risk of developing the disease. Interesting fact remains that the SUN’S UV produces sufficient amount of vitamin D, hence, my friend requires exposure to sunlight for about 5 to 15 minutes at midday and a few times per week to do the trick. He doesn’t eat much fish either, the largest quantities of the vitamin food are found in very fatty fish. Matthew did not want to suffer brittle bones which is a norm with vitamin D deficiency, so he started to think from the area to improve his vitamin D intake. His plan was to take break throughout the day outside to get more sunlight exposure, take vitamin D supplement. Now Matthew is feeling much better, hope you learnt something.

IN CASE you have been DIAGNOSED with KIDNEY FAILURE, here is the BEST NATURAL SOLUTION to help restore the function of your kidney.

Few foods naturally contain vitamin D and only a few are fortified with vitamin D. Most people get more than 90% of their vitamin D requirements from exposure to sunlight. Vitamin D deficiency is common in both the general population and in patients with chronic renal failure (CKD). Increased use of sun-blocking agents and decreased exposure to sunlight, to reduce the risk of skin cancer, attributed to exposure to UV radiation, may contribute to the increase in vitamin D deficiency in the population. These issues are particularly important in the dialysis population who are at particular risk because these, mostly elderly, individuals have an inactive life style and have reduced exposure to sunshine and UV light, thus limiting the actinic synthesis of vitamin D. Vitamin D not only contributes to skeletal health but also plays a major role in the health of a wide variety of other organ systems. It seems that vitamin D supplementation is the most effective way of preventing vitamin D deficiency in patients with renal failure

Vitamin D deficiency is an increasing health problem in the general population. Chronic kidney disease is known as a risk factor for the development of vitamin D deficiency and is associated with increased mortality and morbidity. The main way to create vitamin D in our body is through direct sunlight contact. Vitamin D is found in sufficient amounts in very little food. Although it is abundant in oily fish, it is almost impossible to get enough vitamin D from daily foods. Vitamin D is known to have many important effects on calcium, phosphorus and parathormone metabolism, body growth and development, cell differentiation, brain development, immune and defense systems. These effects of Vitamin D should not be ignored in dialysis and chronic kidney patients. There is a need for studies evaluating the effects of replacing vitamin D in dialysis and chronic kidney patients. Naturally, very little food contains vitamin D, and only some of it has been processed with vitamin D. Most people get over 90% of their vitamin D requirements from food. Vitamin D deficiency is common in both the general population and chronic kidney patients. Increased use of sunscreen agents, avoiding sun exposure to reduce the risk of skin cancer, may contribute to increasing Vitamin D deficiency in the population. This is especially important in dialysis patients, especially in elderly dialysis patients, in those with an inactive lifestyle, and in those with reduced exposure to sunlight, the actinic synthesis of vitamin D is reduced. Vitamin D plays a major role not only for skeletal health, but also for the health of many organ systems. The most effective way to prevent vitamin D deficiency in patients with kidney failure is to give vitamin D.